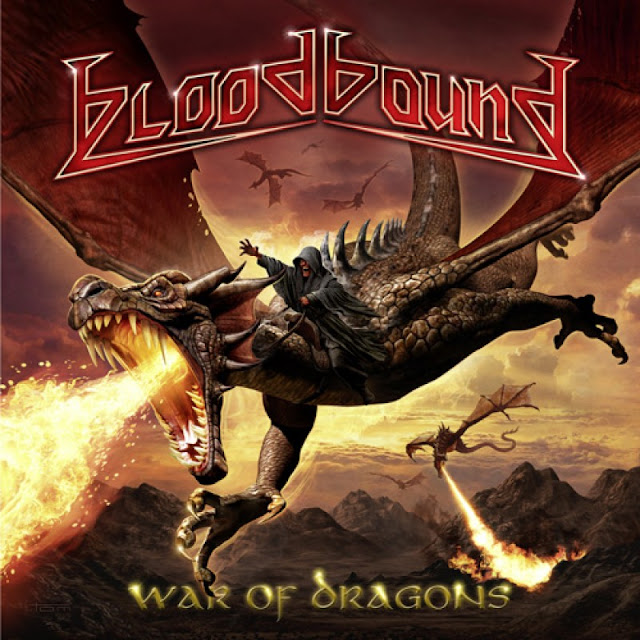 Power Metal and dragons go together like peanut butter and jam and Bloodbound are showing this off to the fullest extent with their newest release “War of Dragons” released through AFM Records. Without a doubt, this is the definition of Power Metal, as “War of Dragon” takes you on a fantastic fantasy journey through time and space to show you the war of dragons.

Kicking off with “Battle in the Sky” and “Tears of a Dragonheart” you get a very quick grasp of what this album with be like. Fast paced, impressive riffs, consistent and impressive musicianship with awe inspiring solos and of course, the majestic voice of Patrik Johansson. The opener “Battle in the Sky” is fairly straight forward, doesn’t toss you any curve balls and just kind of allows you to get use to what Bloodbound are here to do, take you on a journey and shred. Much like the track before it, “Tears of a Dragonheart” is much of the same, an introduction to the other part of Bloodbound. The side that instead of being straight of Power Metal, packs more of a punch, has more of a Speed Metal backing to it and the solo in this song shows it all, making the one in “Battle in the Sky” look like something a child would play.

Instrumentally and vocally this album is impressive, beginning to end, it was unexpected to say the least. While Power Metal isn’t all that easy to find the exact bands that influenced them, there was one stand out song on that album that had a very Judas Priest vibe in the style it was written and the way it was done, specifically vocally. “King of Swords” is very reminiscent of “All Guns Blazing” off of Judas Priest’s album “Painkiller”, the vocals kick off with such sheer power that they almost sound harsh, like they’re about to belt out some crazy Death Metal vocals, before leading into something more similar to the rest of the album, while still maintaining Power and Speed.

To round up everything stated above, this is a Power Metal album for anyone who’s a fan of Power Metal, the musicianship is incredible, the production is top notch and everything is mixed in so well that it doesn’t feel like anything is overpowering anything else, while still being able to hear every aspect of the album, which is where a lot of bands of every genre fail. If you’re a Power Metal fan, or you’re looking for a place to start, this is it. Bloodbound blew all expectations out of the water with “War of Dragons”.

While you're there do the same for us

And why not pick up War of Dragons while you're at it
Posted by Five Magics Music at 10:33 AM